As you know I’ve followed some basic command line courses not were they only basic, the commands never stuck in my brain

Memrise has an excellent command line course called Shell Fu created by Adam Chainz, who is also a web developer at memrise. This course not only learns you the command line but it also, as the name of the site already indicates

helps you memorizing the commands.

The other course I highly recommend is the Git course, created by shamgar. In case you wonder what Git is, wikipedia explains it rather well:

In software development, Git (/ɡɪt/) is a distributed revision control and source code management (SCM) system with an emphasis on speed.Initially designed and developed by Linus Torvalds for Linux kernel development, Git has since been adopted by many other projects.

Every Git working directory is a full-fledged repository with complete history and full revision tracking capabilities, not dependent on network access or a central server.

So if you have ambitions in programming, learning Git is a must

But the course I am totally smitten with at memrise is, the prime factorization course

I joined memrise at the 29th of April to do the Shell Fu course, which I still do daily btw. Yet I control the leadersboards at memrise when it comes to prime factorization 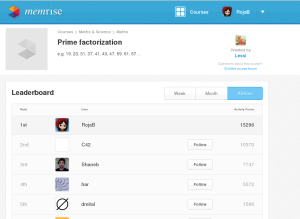 What can I say, I just love to break numbers into primes