Exactly one year ago, on the first of January 2020. I went out for dinner with someone who flew back from Italy that morning. She (I will call her X from now on) spent three weeks in Italy celebrating the holidays with her family. See normally when people fly back from abroad, they leave they airport as quickly as possible to head home. Not X though, when she arrived on Schiphol Airport that day, she spent hours hanging around on the airport by herself while drinking cappuccinos

When she finally headed home she sent me a text, asking me if I had plans for tonight. I said I didn’t, so she invited me to have dinner with her in a restaurant. We sat there in close proximity (as was normal back then) eating and talking for hours. I noticed X had a cold, she was sneezing and had a runny nose. I didn’t think anything off it, after all it was winter everyone gets a cold right?

So on the 12th of January I got ill. People who know me, know I never get ill. And if I get ill, I don’t complain, hence the image “Janice never gets ill”.

But this time  it was different. I got a fever that just wouldn’t GO THE FUCK AWAY! I took the maximum allowed Ibuprofen and the still the fever stayed which was shocking, since 1 Ibuprofen used to be sufficient. So being the smart person I am I decided to take 5 more Ibuprofen more then is allowed without consulting a doctor

Normally I am not this retarded I swear

but I couldn’t think straight due to the fever. Taking the 5 extra Ibuprofen didin’t help btw, the fever lasted for 6 days. During those 6 days I literally couldn’t do shit, besides lying in bed watching Chateau Meiland and complain to everyone about how  ill I am.

After those 6 days I went back to work, I still had a cold and a runny nose. One off the things I noticed after my initial illness  there was a shortness of breath and me being dizzy. These two things lasted till April at least. But I didn’t think much of it in the beginning. I thought the shortness of breath had to with my age and sedentary lifestyle. The dizziness I blamed on being vegetarian and not getting enough carbs, I am the kind of person who struggles to eat 150 grams carbs a day.

So when COVID-19 started getting mentioned on the news a lot, like in early February 2020, I didn’t think much about the fever I had. Hell, back then I didn’t take COVID-19 serious, even though I saw on the news how it played out for Italy. I took COVID-19 seriously when a Dutch doctor went nuclear on my ass, after I told him that “COVID-19 is just a flu” this was on Friday the 13th of March. Two days before the first partial lock down was announced on the the 15th of March 2020. It got me thinking about the fever I had early in January 2020 and shortness of breath and the dizziness I was still suffering from.

I took the first partial lock down very seriously, yes people I went to the supermarket to haul on toilet paper and certain foods. I tried to do it undercover

without the help of Sonia (my real mom). I told her specifically that I went to haul stuff in several supermarkets undercover. 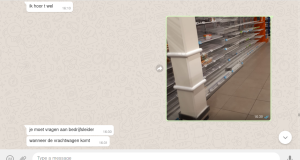 Yet she still advised me to ask the supermarket manager to ask when a load of non-perishable stuff would arrive, way to blow my cover mom.

Then she asked me to take a picture of my cart in while being in the supermarket, yes mom that is really a thing someone should do while hauling stuff undercover

Taking proudly pictures of their cart in the supermarket. 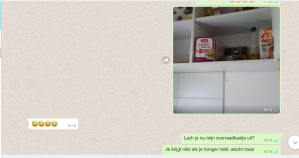 (People, I live in a very tiny studio so there is not much to store.)

Ooh, regarding X, I never discussed with her whether I might have gotten COVID-19 from her or not. After that dinner I kind off stopped talking to her. It was not about getting the virus from her, but her openly preying on under-age boys while going out with me.

I do wonder though if she brought COVID-19 to Rotterdam and made it spread like wildfire. See X is an expat, she came to the Netherlands in June 2019. And ever since she seems to have one, and only one hobby which is going through Tinder like a mad woman. Every Friday and Saturday night she fucks a different guy, obviously that is not enough

So she also has a 19 year old fuck buddy on the side. This fuck buddy is a student whose part time job is delivering groceries. Till this day it amazes that Brabant was the first Dutch location where COVID-19 became problematic and not Rotterdam due to X her side activities.